CBD Oil For Cats: What’s safe to use?

The burgeoning cannabidiol (CBD) industry continues to expand at a significant pace, and pet owners have been no exception to this trend. While dog specific products are currently dominating the hemp market, there has also been a considerable increase of interest in CBD oil for cats. So, what’s safe to use?

It can be overwhelming when trying to research information on an industry that has relatively little regulation — like CBD — because this means that it requires more work on the part of the consumer in order to be assured that a quality product is being purchased. When it comes to pet owners, nothing is more important than seeing to the safety of our beloved animal family members.

A recently published study was one of the first of its kind in an effort to determine the safety of both tetrahydrocannabinol (THC) as well as CBD oil for cats. According to its findings, the study claimed that “all observed adverse events (AEs) were mild, transient and resolved without medical intervention”, which would indicate that the compounds are relatively safe for pet consumption.

Previous research into the pharmacokinetics of CBD for cats and dogs had come to mixed conclusions regarding its safety with particular relation to cats, as one study cited instances of excessive licking and head shaking after its administration.

CBD is one of the many compounds that is produced by the cannabis plant, known as phytocannabinoids, and the most prominent of which are CBD and THC. When ingested, these phytocannabinoid compounds are able to interact with the internal mechanisms of any creature that has an endocannabinoid system, which includes all vertebrates, such as humans, dogs, and cats.

However, in contrast to humans and dogs, relatively little analysis has been done outside of a few studies with regard to CBD oil for cats, despite the increasing interest in such products. It is hoped that as the Federal Drug Administration (FDA) will continue to work towards official regulation of CBD for standards to be applied across the market, especially with relation to pet products, as it is vitally important for the industry to have universal requirements to ensure the utmost safety.

Is CBD Oil Safe For Cats?

Ultimately, in order to determine whether a particular CBD oil is safe for cats, you have to look at all aspects of the product. What additional ingredients do they use? Has the product been certified with any pet organizations? Is it a reputable company?

There are many ingredients that you should be careful about feeding your cat, and some of these might be included in CBD products that are formulated for humans, which is why you should always be wary of giving your own CBD product to a cat.

When it comes to your cat, it is important for you to look out for these ingredients: Food dyes, in addition to Butylated Hydroxyanisole (BHA), Butylated Hydroxytoluene (BHT), and Ethoxyquin, which are all antioxidants that are commonly used as food preservatives. Things like garlic, onions, soy, and rendered fat can also be potentially harmful.

Cats have an Endocannabinoid System

Like all vertebrate animals, cats have an endocannabinoid system. This means that their bodies have an internal substructure that contains the necessary receptors which are designed to interact with the cannabinoids in hemp, the same way humans do.

These cannabinoid receptors are known as CB1 and CB2, and different compounds in hemp can interact with them differently. Many researchers have noted that the combination of many different cannabinoids is the most optimal, as their combination results in what is known as the “entourage effect”, which means that the sum of the compounds are intended to work in tangent as to provide the best.

CBD Oil For Cats with Anxiety

So far, most of the studies and information gathered has been regarding the study of dogs, in particular, dogs with anxiety. So another question pet owners might have is, can you use CBD for cats with anxiety?

As previously stated, relatively little research has been done regarding the impact of CBD for cats with anxiety, The entire hemp industry is waiting for the FDA to make specific determinations regarding its efficacy in treating a variety of ailments.

Carriers That Are Unsafe

Full spectrum CBD products often require the use of a carrier oil that works as a preservant for the hemp extract. The most common carriers that are used in hemp extract can include oils like medium chain triglyceride (MCT), avocado oil, hemp seed oil, propylene glycol, or vegetable glycol.

If you are looking for a CBD product for your pet, make sure that it utilizes an oil that is safe for animals. MCT is a good option as it is considered safe for pets and cats in particular.

Another good option for pet owners are CBD cat treats, which might be easier to administer over an oil tincture. Treats are a great way to reinforce positive behavior, and will also help to ensure that the cat enjoys taking a daily CBD supplement. Plus, every cat always deserves a treat, so it’s a win/ win scenario!.

Safe Alternatives For Calming Your Cat

There are plenty of over the counter products you can try if you’re not ready to try a hemp product.

A popular product for cat’s that suffers from anxiety is a calming collar, which is designed to emit pheromones which are comforting to the animal.

It is very important to be careful about what kind of oils you use in a diffuser if you have a cat, because most of them can be very toxic for your pet. Here is a list essential oils that could be harmful: 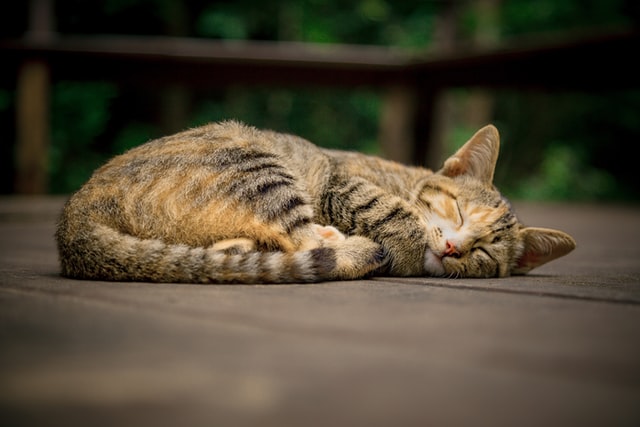 There is some conflicting debate regarding the safety of lavender for cats, as some options claim it is safe while others say the opposite. When in doubt, always err on the side of caution. Cats have extremely sensitive systems which is why it is so important to be aware of the ingredients you are exposing them too.