How Do Neurons Communicate?

When it comes to our brains, people often take for granted the incredible process that enables us to perform even the most simple of tasks. The slightest movement of our body requires a sophisticated system of complex calculations that our mind is able to compute almost instantly.

Comprehending the mechanisms that our body utilizes to function requires an understanding of the nervous system and its fundamental messaging component, which are nerve cells — also known as neurons. So, how do neurons communicate with each other?

Our mind operates like an organic computer, as it is able to send and interpret electrical impulses that carry signals. These signals act as messengers and are used to communicate various inputs as well as tasks to be executed.

Each time our body perceives external stimuli — through touch, sight, taste, smell, or sound — the physical input is converted into an electrical signal that travels to our brain, which then interprets the data and responds accordingly.

Those electrical impulses are carried by the nervous system, which is spread throughout the entire body in order to conduct its signals.

The central nervous system is made up of the spine and brain, which acts as a processor. When our brains receive and interpret electrical signals, it is able to convert them into data that the rest of the body can recognize and decipher.

The peripheral nervous system relates to the parts that function outside of the brain and spinal cord. It consists of branches of nerves that extend out from the spinal cord and into all other parts of the body. This includes cranial nerves, spinal nerves, and neuromuscular junctions, which are the spaces (synapses) between nerve fibers and muscle cells.

The peripheral nervous system also deals with autonomic body functions of involuntary structures such as the heart.

Neurons are the principal unit that the brain uses to communicate with the rest of the body. There are different kinds of neurons, with each having its own task to perform.

Afferent neurons are also known as sensory neurons, and they transmit the signals that we receive from our senses, including our ability to touch, hear, see, smell, and taste. This also includes the perception of heat, cold, and pressure.

Whenever the body receives any sensory input, those signals are relayed to the central nervous system by afferent neurons, vs. efferent neurons, which are used to control our movement. Efferent neurons are able to direct the muscles that are attached by ligaments to our skeletal system.

Anatomy of a Neuron

The anatomy of a neuron is fairly simple and begins with structures known as dendrites, which are specialized extensions that branch out of the neuron. Their function is to receive chemical messages from other neurons and convert them back into an electric signal that can be relayed on through the neuron.

After the signal is converted, it then travels down another structure called the axon, and into the axon terminal. The axon is surrounded by a special protective layer of fat cells called glia, and this is referred to as the myelin sheath.

Once the electrical impulse reaches the axon terminal, it is converted into a chemical signal. This triggers the release of neurotransmitters, which are stored in sacs called synaptic vesicles at the end of the terminal.

The neurotransmitters then proceed through the synapse to be captured by the dendrites of another neuron, which converts the signal back to electrical and sets the entire process into motion again.

Presynaptic neurons are responsible for sending out information in the form of chemical messengers, via neurotransmitters.

Postsynaptic neurons are in charge of receiving information through chemical messages.

What is a Synapse?

So, what is a synapse? It is a term to describe the small spaces in between nerve cells, where information is transferred from one neuron to another. Each nerve cell can contain thousands of synapses.

Electrical synapses are used for very fast reflexes, as they transmit information much faster than chemical synapses. However, the signal can slowly become weakened after traveling between neurons, so they are only used in certain situations.

For mammals, chemical synapses are the most common type, because they allow for greater flexibility. They are slower at relaying information because they take time to have the signal converted from electrical to chemical at the synapse. They are also used to communicate to non-neuronal cells that are located in muscles, as well as glandular expression. 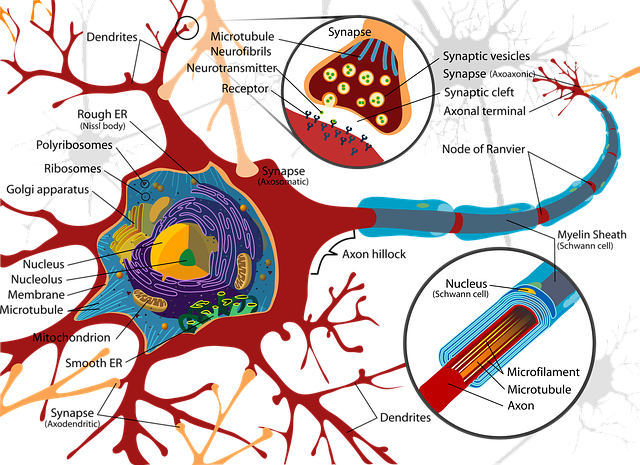 Receptors are protein messengers that operate by initiating chemical responses to relay information. When they receive the electrical impulse, the neuron releases neurotransmitters that are received by the receptor, and this triggers a signal cascade, which is used to send charged impulses and relay the signal to the synapses.

Excitatory neurotransmitters are able to facilitate the process of generating an electrical signal, known as an action potential, to be received by another neuron.

One of the most abundant excitatory neurotransmitters in our nervous system is glutamate, and its levels are very highly regulated as it is extremely important for the operation of normal brain functions.

Inhibitory neurotransmitters are able to block the process of an action potential from being received by other neurons.

One of the most significant inhibitory neurotransmitters are the gamma-Aminobutyric acid (GABA), which are produced in the spinal cord and derived from glutamate.

Modulatory neurotransmitters function differently in several ways, as they are able to affect a larger number of neurons simultaneously, and they can also modulate other types of neurotransmitters.

The endocannabinoid system performs in part through the nervous system, and it utilizes its own arrangement of ligands and receptors that operate throughout the body. Its main job is to maintain homeostasis by modulating other systems wherever it perceives an imbalance.

The endocannabinoid system receptors are activated when specialized compounds that are found in the cannabis plant, called phytocannabinoids, are introduced into the bloodstream.

The most prominent phytocannabinoids are tetrahydrocannabinol (THC) and cannabidiol (CBD), and there are many different ways in how they interact with our internal receptors.

THC is the only phytocannabinoids that produces intoxicating effects, and is primarily found in commercial strains of marijuana. CBD works quite differently than THC, and it is the dominant cannabinoid in hemp.

While hemp was legalized nationwide in 2018, commercial marijuana containing more than 0.3% THC is still banned at the federal level, although many states and regions have voted to locally repeal its prohibition.

Japanese scientists were first able to prove the existence of the endocannabinoid system when they successfully isolated specialized cannabinoid (CB) receptors in the brains of a rat.

So far, researchers have discovered two separate cannabinoid receptors, known as CB1 and CB2. CB1 receptors are primarily found in the brain and operate as part of the nervous system, while CB2 receptors are found on white blood cells and work in tangent with the immune system.

Different phytocannabinoid compounds vary in terms of how they are able to interact with CB receptors, and this affects the properties of each individual phytocannabinoid.

What do endocannabinoids do?

CB receptors generate neurotransmitters known as endocannabinoids that are created on demand. These endocannabinoids are designed to carry out a variety of functions, depending on where they are in the body, and what kind of receptor is producing them.

Anandamide was the first endocannabinoid to be discovered, and it binds with CB receptors, as well as facilitating the release of other neurotransmitters, such as serotonin.

It is metabolized by an enzyme called fatty acid amide hydrolase (FAAH), although this process can be inhibited by CBD, so that it enables anandamide to stay in the bloodstream for a longer period.

2-AG is considered the true natural ligand for cannabinoid receptors and is a fundamental component of the processes involved in retrograde signaling within the brain, which involves signals relayed through postsynaptic neurons.